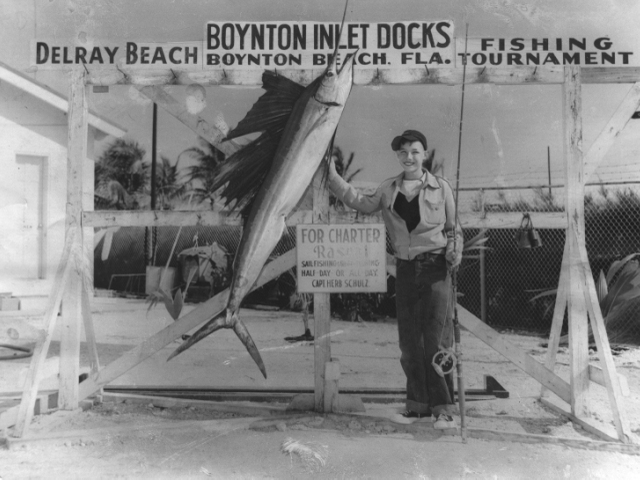 I was born in Louisville, Kentucky in January 1944, what you would call a war baby.

My mother and father were both born in Louisville and attended school in Louisville. They met at the old Anchorage High School and were married in 1941.

My father became a pilot in the Army Air Force in late 1942 and was serving in England late 1943 and early 1944. His plane was shot down over Germany on April 1, 1944 and none of the crew made it through the crash and burn.

My mother bought a car and a trailer from my grandfather, a Chevrolet dealer, and then headed south. Mother, my grandmother, and I made it to Tampa, Florida, after driving through Alabama in the dead of winter.

She was told one of the best parks was on the east coast at Briny Breezes, and after checking out the park, she decided to take us and the trailer there. Just outside of the park was the Jungle Inn Bar, a favorite hangout for singles in those days. My stepfather, his brother, and uncle were working on construction of new homes in the Boynton-Delray Beach area. My mother, a lonely war widow, and my stepfather, lonely war vet, met each other at the Jungle Inn and six weeks later wedding bells were ringing at the Lutheran Church in Delray.

They lived in the park for about six months after this and ended up renting a home in downtown Boynton Beach. Within a year, they purchased a home in Delray Beach and moved just before the 1947 hurricane. They constructed a small, two-bedroom cottage on the rear of this property and would rent out the house to winter visitors and live in the cottage.

My stepfather remained in the construction business until 1957 when he suffered several strokes on Easter Sunday, ending his home construction business. At one point, he worked with an investor, constructing several homes in Boynton Beach. My father had to make many trips to Miami to see the investor while the development of this street was taking place.

Over the years, we made many trips to Miami to attend some of the attractions such as the zoo and the Jungle Gardens. After my father’s strokes, he went to work for a company in Boca Raton that did business all over the United States.

They would have an annual picnic at Crandon Park in Miami. Several times when my parents had to fly out of town for a special vacation, they would leave from the old Miami International Airport.

My wife and I met at the First Baptist Church in Delray Beach Florida, and in 1965 were married at First Baptist. We left Boynton in September, 1965, and moved to Louisville unfortunately, our moving van did not make it that far.

Somehow it went off a mountain in Tennessee and that was the last we saw of most of our possessions and wedding gifts. We had moved to Louisville, because I was going to work for my father’s family business. The Eline Realty Company has been in business, either selling homes, building homes, or selling Chevrolets, since 1913.

I will always have a fondness in my heart for South Florida and the twenty years I spent growing up there. My wife and I still enjoy coming to the Panhandle every spring for rest and relaxation. The place we go to has only one fast-food restaurant in the whole county.

The east coast has gotten somewhat overcrowded with people, roads, and buildings the last 30 years, but that is progress.